What do Kp numbers mean? How does it affect drone flying? The Kp number is a system of measuring aurora strength. It goes from 0 to 9 (0 being very weak, 9 being a major geomagnetic storm with strong auroras visible).
Kp's of 1-4 are completely safe. At a Kp of 5, you'll have problems perhaps 1% of the time. At a Kp of 6, you'll lose an average of 5% of your locked satellites; at 7, you'll lose roughly one third.

DJI Drones: Sure They Can Shoot, But Can They Race? Hardly anyone would dispute DJI drones being among some of the world’s best for aerial video and photography. Drone racing, however, is a whole different ball-game from the relatively slow and steady world of camera drones, which are built primarily for shooting. Racing drones not only have to be fast, but light, agile and have excellent control—which racers will tell you counts much more than speed.

So can DJI give other models a run for their money in a race?

You Can Fly, Too! Drone-Flying Tips for Newbies

We've shared these beginner-friendly features and made a shortlist of four drone-flying tips for newbies. Read, learn, and enjoy!

How to NOT Crash Your Drone in 15 Easy Steps Flying safely, knowing your limits, and understanding how your drone works are essential when taking aerial photos or videos. As a drone enthusiast, I've seen my fair share of drone fail videos on YouTube, many of which result in awful, not to mention expensive, crashes. Most of these crashes could have been avoided by taking some simple safety precautions.

Everyone fears their drone may unexpectedly fly away and never be seen again. DJI drones are designed to automatically Return to Home (RTH) if you lose RC signal. However, some pilots have experienced what is often called a flyway. According to users flight data, the vast majority of flyaways are caused by several common pilot errors. Here are five simple steps you can take to prevent your drone from flying away

This is one of the most important things I recommend before taking your drone out and flying it anywhere you think you may have trouble. Find a safe spot in an open area to get a feel for how it operates. Itâ€™s best to learn how to use it and be comfortable with it before taking it into tighter spaces or flying for any commercial work.

The Dos and Don'ts of Drone Flying 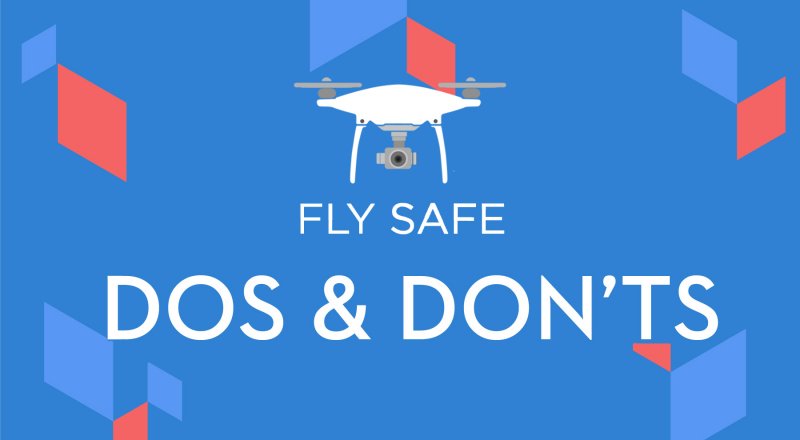 Whilst drones are a great tool for taking amazing videos or photos, unfortunately, its aerial nature can cause safety concerns that could have serious repercussions for the pilot. So to help all you drone fliers out there, we here at DJI support have put together a comprehensive 20 point list of dos and don'ts for flying your drones.